So when Ben suggested in the middle of church that we go to the snow, I said, “Okay, but let’s wait until church is over before we leave…”

Last year we went up to the snow when it was cold.

Now, I’m not saying cold is “bad.” Honestly, since moving up to Washington I have been surprised how much more I like the cold than the ridiculous heat in California.

I remember knowing it was going to be a really hot day if it was over 90 and my forearms were sweating…by 8am. That was going to be an unbearably hot day. The most frustrating thing about the heat was that when it was in the 90s, it was okay. Just keep the kids hydrated and sunscreened, and we’re good to go.

But when it got over 104, which was constantly in the summer, the ground was too hot to step on and the sun was too hot to play in for too long…so I had to keep the kids indoors so they didn’t overheat or get sunstroke or burn to bits. And that was absolutely no fun.

Plus, I was pregnant most of those summers, and if you ever tell a pregnant woman that overheating is not a thing, you will not live to the end of the conversation. Overall, getting in the car in the middle of May and the car thermometer reading 116F is never a good time.

So, even though we just got through the rainiest and wettest winter the Puget Sound has had in the past 144 years (or, as long as we’ve been recording the weather up here), and dealing with overcast days which never quit, and having to buy waterproof jackets because you are going to get rained on, whether it is sunny now or not… it is STILL better than those summers in California!

But, as I was saying…last year when we went up to the snow, we treated it like going on a day trip to the Sierras.

And the Olympics are so not the Sierras.

When we took day trips to the Sierras in the spring, we’d take some gloves, jackets, extra pants, spare socks. Just the basics to play in the snow on the side of the road, build a few snowmen and call it a day.

The Olympics are different.

This snow was cold, blue, 6 feet deep, and ubiquitous. There were walls of snow 10 feet high, and this snow covered the entire mountain range. It was way out of the league of Sierra snow. This felt like real snow, and we basically came to the snow expecting a summer resort to be waiting for us.

Last year it was white-out conditions on the mountain, it was colder than I have ever experienced in my entire life, the air hurt our faces and we were vastly underdressed (see: expensive trip to the gift store)

This year, we changed our game plan.

And made proper snow angels…

THIS time we came overly dressed, changes of clothes, waterproof shoes and on a sunny day! 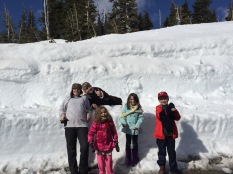 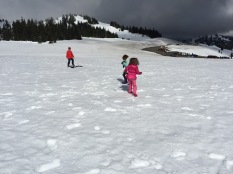 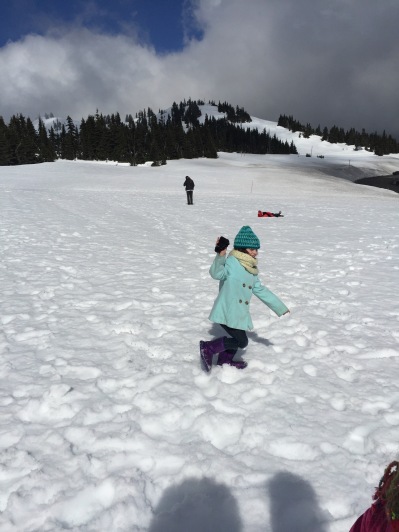 Let me tell you, scarves are not just for decoration anymore.

They actually keep the wind out of your jacket and keep your neck warm, and they are indispensable articles of clothing!! Who knew.

There were so many walls of snow, we had to write our names in the wall…

There were some small hills where we just sat at the bottom and let the kids slide down for as long as they could. At some point they decided that their backsides were plenty wet and cold enough, and they would prefer to go back to the car and change into dry clothes. But we definitely got our fill of snowdom. 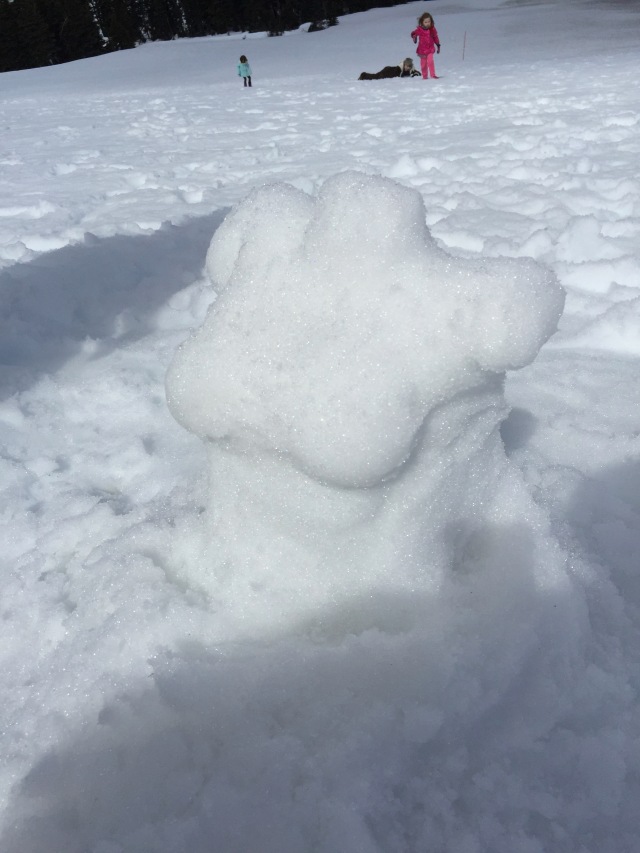 Now, I don’t know how to explain this properly, so I’ll just start by explaining it poorly…

I am a terrible snowman maker. Spheres are just so hard to make properly, and I am always overcritical of my snow-sphere making abilities. So, last year I made a snow-bust….because I can do that!!

This year I continued my legacy and created another snow bust, and I can say that I am very pleased with the results. Next year I am going to bring even more waterproof gloves (because mine had a limit, apparently) and I am going to build an even bigger bust…maybe even take a crack at David, who knows.

We had a fantastic day out there, and I cannot describe how beautiful the Olympic range is. It is an incredible and dynamic range of mountains which take your breath away.