Waayy back when, in January, particularly, I acquiesced to get a new toaster.

It was a weird decision, since you can literally just go down to Target and get one for $20, and that is that.

But, naturally, I turned a very simple, uncomplicated decision that would have been very easy to solve, into a long drawn out emotional tale of fire and ice.

Listen. You ask a poet to buy a toaster, you’re going to get an epic tale. That’s just how it is.

So. Since the crew and I were at Target getting groceries anyway, and we were passing by the toasters anyway, I let the kids pick out a toaster for the kitchen. They were delighted to see that it had a bagel button (I have no idea what this does, besides toast more vigorously).

So, the news is that we got a toaster…and the kids are basically living on toast right now.

In other news, I also have been experimenting with Sloppy Joes!

Which is a weird thing to experiment with. But we’re doin’ it anyway!

See, the thing is, the kids were in band camp a few weeks ago and band camp had really impressive lunches every day. Asian chicken salad, monkey bread, taco salads and Sloppy Joes.

They were not fans of the Sloppy Joes because the meat was way overcooked in an industrial sized crockpot that could feed an army…which, I guess it did. There were ~150 kids in camp, so it’s either that or have a fleet of crockpots.

Anyway, the Sloppy Joes were more black than brown and mushy than tasty. Nova said it tasted like warm coffee grounds, and no one wanted to have Sloppy Joes ever again.

I have never been a big fan of Sloppy Joes, since it’s just kinda mush on a bun…but, still. I can’t let the kids believe there is nothing redeeming about the dish. So, it was my responsibility to find a Sloppy Joe recipe that was killer.

Dude, these things were killer. They were zesty, tasty, fresh and not only did the kids love them…I loved them.  I will definitely be revisiting this dish in the future!

Besides these amazing things, we’ve also gone to some wildlife lectures…

Made some vanilla playdoh….. 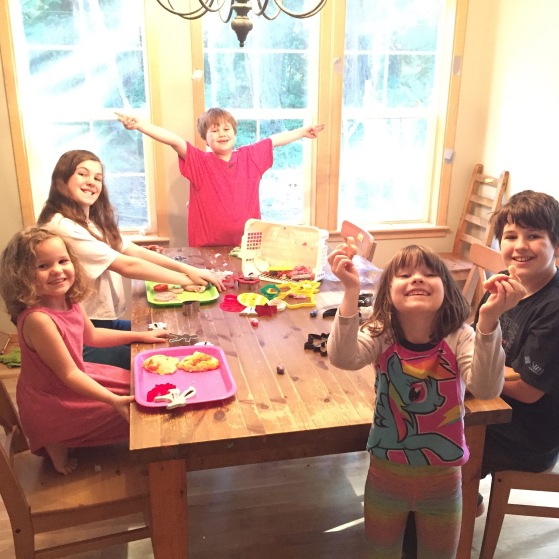 WE FINALLY WENT TO DICK’S, AND IT WAS EVERYTHING WE HOPED IT WOULD BE.

AND WE WILL BE VISITING MORE OFTEN.

And here is Conrad, just being dapper. Because he is.