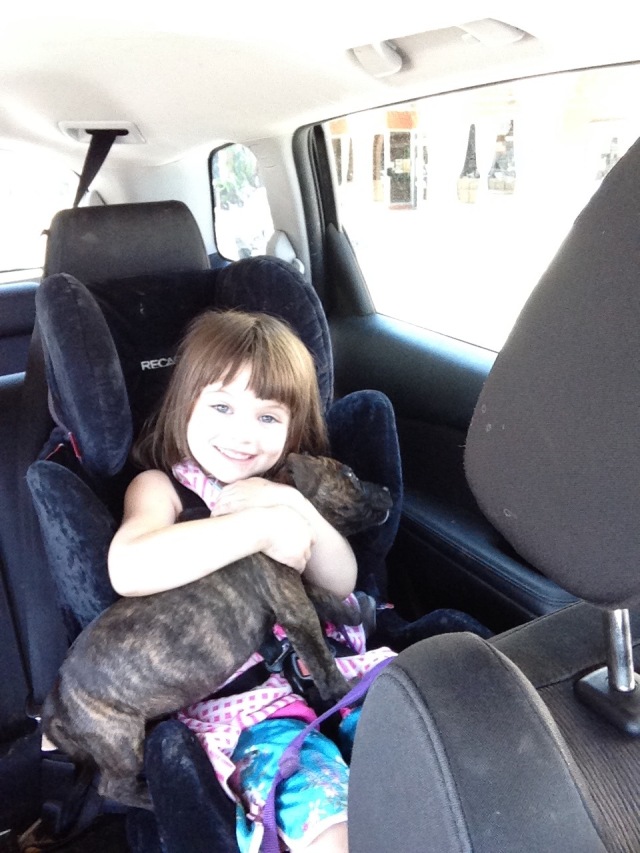 This little girl is terrified of dogs.

She is so scared of dogs, she couldn’t even be in the same room with them.

I have comforted this little girl when she was standing on the couch screaming, because our older cocker spaniel walked through the room. She had never been bitten by a dog, and she had never seen someone be attacked by a dog. There was something very deep down in her soul that simply told her that dogs were a malevolent force in the world. She believed very sincerely that she was scared of dogs, and that was that.

Until she met Charlotte.

Charlotte is a funny story…I had just dropped some people off at a Bay Area airport at a blistering 6am, and beat the traffic home (which is weird to say, if you are from the Bay Area). So there I was, at an underripe 7am, sitting in my front room drinking coffee with Ben.

a knock at the door. On a Tuesday. At 7am. Who on earth could this be??

It was a neighbor we had seen around, but never spoken to. In his arms he clumsily held a very young 8 week old puppy. He was very polite, but rather shy about asking the awkward question: “This puppy has been sitting on my lawn for the past 4 hours. Is it yours?”

Since we were the only ones in the neighborhood with a brood of children, it would be the logical assumption that it was our lost puppy. That would be my first guess, as well; but, alas, it was not our puppy. I had already promised Ben we would get no more pets, especially dogs (remember this for later).

I looked at the uncomfortable cradle this mad was holding the puppy, and realized that he was not familiar with puppies. The head was draped over his forearm in a crooked slant, and the legs were askew in his embrace. It looked lost and afraid, and being carried far, far away from his home.

I replied, “No, that isn’t our puppy.” Simple enough, “However, we do have a dog already so we have dog food on hand. I can take him for you, and we will find the owner.”

Our kind hearted neighbor gratefully handed the little bundle over to me, and we smiled and parted ways.

I turned around to see Ben standing behind me, half drunk coffee in hand, and asked:

“It was the right thing to do, and you know it.” I replied, confidently. And marched right into the kitchen to refill my empty mug, since it was going to be a long day ahead of me, after this decision.

I will say that I am usually quite confident about the decisions I make in life, which I have always admired about myself.

Sometimes, for instance, I am sincerely confident that I made the right choice in a matter. I have thought the instance through, and I believe that, easy or hard, the decision I have made was the right one to make, for all involved.

And other times I am absolutely certain I just waded into a fast running current with no life vest and no back-up plan.

I won’t admit to which of these confident positions I stood with this matter, but that is really beside the point for this story anyway.

tl;dr – we found a perfect home for Charlotte 4 months later, and I am glad for the time we had with her.

The point of this story is not my lightly impulsive decision making skills when it comes to accepting lost baby animals into my home.

The point of this story is the look of joy on my daughter’s face when she held Charlotte.

There wasn’t an inkling of fear as she held that puppy. She refused to let her go, and doted on her day in and day out. She made sure the puppy had food and water, and brought her blankets for her nap. This was a breakthrough among breakthroughs…and I guess she just needed to find the right dog to break the ice.

Well, it’s been a good 2 years since we last saw Charlotte, but I have never forgotten the look of joy.

So, after lots of mildly obsessive research on dogs, I found the dog that would be perfect for us.

No one believes me, but Pomeranians are not yappy dogs…they are actually Icelandic herding dogs!

“Despite its present diminutive size, the Pomeranian originally was used as a sheep-herding dog and was much larger than it is today, weighing up to 30 pounds.”

Poms are also one of the best family dogs with intelligent, happy temperaments. They are easily trainable, and fantastic companions overall.

“Poms are excellent watch dogs and home protectors. They are especially good with children and the elderly.”

The purpose of Sebastian is to be able to tag along with us wherever we go…to the park, to the store, inside, outside, for walks for hikes and in the car. We don’t have to section off the entire trunk for this dog, he can fit easily into our cat carrier and sit with the kids in the back. He doesn’t eat much, he needs daily exercise but way less than a bigger dog. He is happy all the time…and we love him.

“Heaven goes by favor. If it went by merit, you would stay out and your dog would go in.”
—Mark Twain 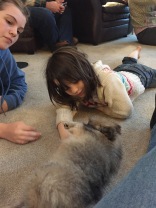 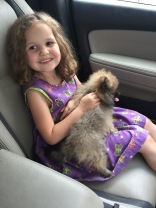 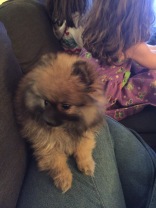 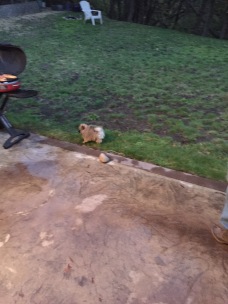 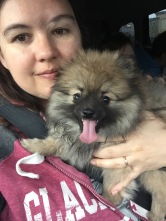 We are having fun playing with him… 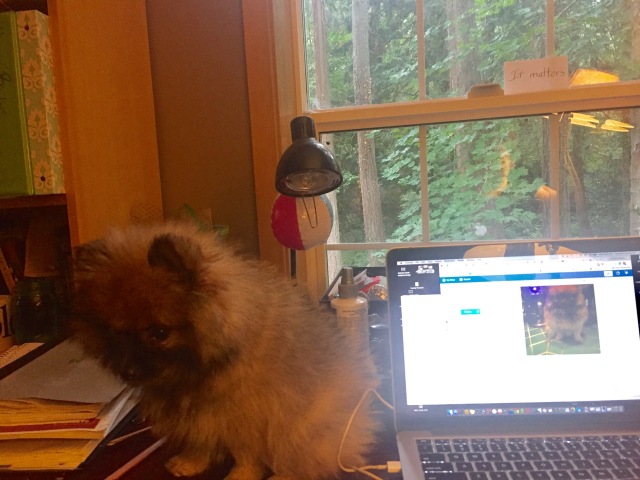 He is turning out to be a fantastic writing companion…

And I found that look of joy for my children.

It is what every parent wants, more than all the gold in the world.