“A ship that sails without a compass will get lost at sea.”

I live by the words, “Always be prepared.”

Mostly to inspire myself to actually prepare for things. There is a moment of utter dread and failure when you arrive somewhere and discover you are missing something fantastically vital to the event, and everything is going to fall apart because of this.

I hate that feeling.

Which is why we entered D.C. armed with a map.

Now, according to Matthew Gilmore, there are 226 museums in D.C.

Which is INSANE and IMPRACTICAL. I also am not interested in most of them, like the National Postal Museum, for instance. Not a big interest in the Post over here, although I’m sure it is fascinating to many. Or some. At least enough to make a museum out of it, apparently.

I am, however, exceptionally interested in just about everything else…which means we needed a vision and a plan!

First we outlined the area we were going to go. Then we made a rough estimate of where we were definitely going to visit, and then had an auxiliary list of places that were along the way in between the core destinations where we could go.

These were the places we did  go to…in alphabetical order:

So, here are the maps we used!

This is where we started. 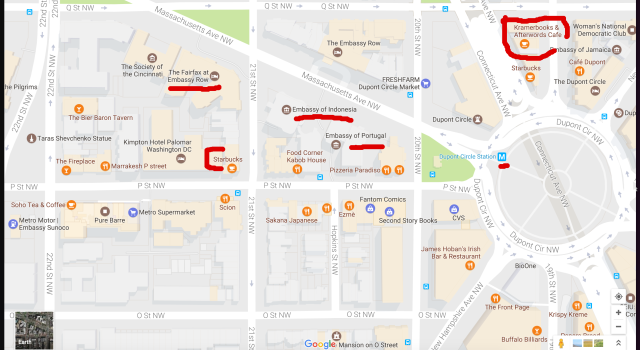 We started at DuPont Circle. The significance of DuPont Circle is that it is just a little outside of the main drag, so we got to see a lot of old houses and Dutch architecture, which delighted my soul:

Definitely a stark difference from beige stucco in California.

It was just amazing how much stuff you got to see just walking to and from places!

This is the map for Dupont Circle. We hit the Starbucks down the block from our hotel, as well as KramerBooks down the road! That is a nice bookstore, and reminded me a lot of bookstores in North Beach in SF. So, a bit of home for me.

This is the overall map of where we travelled.

And when I say “travel” I mean “walk.” I wore my walking shoes with absorbent socks, and I did not get one blister the whole week…which is usually what happens if I try walking all over Seattle in stylish boots. Forego fashion and just wear a pair of sensible shoes, and you’re good to go.

This is the area where all the buildings and museums are…there is still more outside of this area, but all the big ones are here, so this is where we traveled all week.

To the left of the White House, however, is one of the most amazing buildings I have ever seen. It is the Eisenhower Executive Office building, which used to be for the military…before they moved them all to the Pentagon. But this sucker was five times bigger than the White House, and it is where White House staff and the Vice President work: 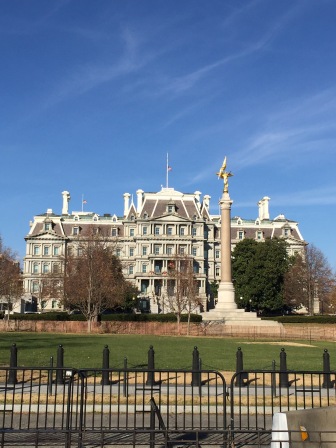 You have to get on the Metro to cross the Potomac in order to reach the Pentagon and Arlington.  But everything is so closely laid out that when we were on top of a hill in Arlington, we could still see the entire Mall. It was crazy.

So, all in all, from Monday to Friday, how much did we walk??

That is a lot of walking, and we were beat after the week. But we covered so much area and riddled ourselves with endless history and knowledge, which make both of us ridiculously happy.